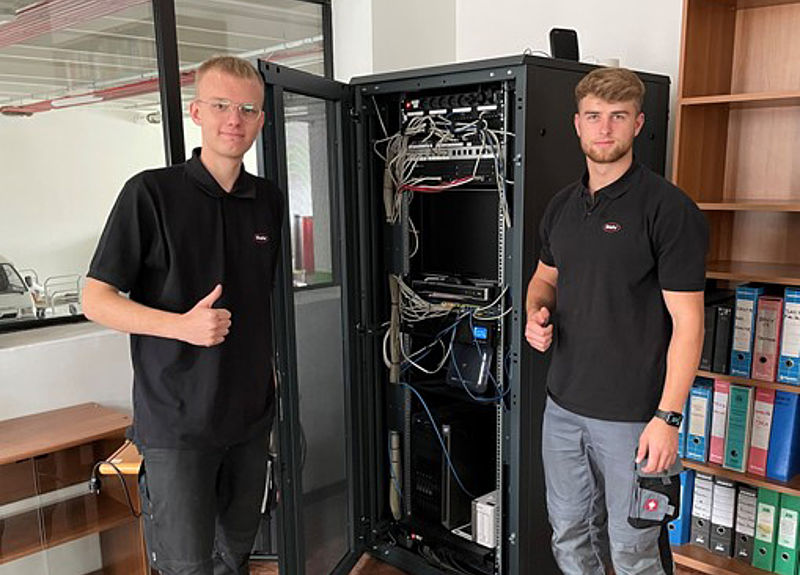 Two Mahr apprentices completed a three-week technical internship abroad in Vicenza, northern Italy, from September 11 to October 1, 2022. Lukas Schwedhelm (22) and Jannik Franke (19), both in their final year of apprenticeship as mechatronics engineers, worked in local companies and got to know the country, the people and the way of life.

Every year, the Hannover Chamber of Industry and Commerce organizes internships abroad together with the "Vocational Training without Borders" network. These are financially supported by the EU's ERASMUS+ funding program. Mahr trainees took part for the first time. Vicenza, in turn, is an industrial city with a population of around 112,000. It is located in the Veneto region, about 60 kilometers northeast of Verona and about 60 kilometers northwest of Venice. While the countryside around Vicenza is agricultural, the city itself has extensive industrial areas, predominantly with textile factories and metalworking companies.

Lukas Schwedhelm also spent the first two weeks of his internship at the "Torneria Nuova Sida" turning shop. "Large quantities of small precise workpieces are mainly produced here, for example for bicycle forks, motorcycles or even coffee machines," he reports. His tasks also included working on CNC machines, for example writing, correcting and uploading programs. On two days, he and his Italian colleagues even disassembled a CNC machine to replace the defective motor. "I was also often allowed into the measuring room to check random samples of workpieces for their dimensions and quality," adds the intern. Here, he also found many measuring devices from Mahr, for example manual roundness and length measuring devices and a mobile roughness measuring device. "Compared to Germany, the manufactured parts are inspected more often, but they don't have to meet the same quality requirements," he sums up. Overall, he felt very comfortable at the company, and communication worked excellently: "There were a lot of younger people working there who were always helpful and could converse in English."

... and into electrical engineering

Jannik Franke completed his entire internship at the da.tel building and electrical engineering company north of Vicenza, and Lukas joined him for his third week of internship. "The company installs and repairs air conditioning, heating and solar systems and automates home automation and electronics," Franke reports. The interns provided active support and were even allowed to work on smaller projects independently. In the morning at 8 a.m., their Italian colleague Stefano picked them up in the van to drive to the respective construction site. "Communication was a little difficult because he didn't speak English," says Lukas. "But we quickly realized that in the skilled trades, a lot can be explained by gesturing." Here, too, he noticed differences from Germany: "In Italy, there are fewer standards and guidelines in electrical engineering than here. While this simplifies the work in some places, it makes troubleshooting more difficult. In addition, safety standards are somewhat lower than in Germany."

The leisure program was not neglected either. On the first weekend, for example, all the interns in the program took the train to Venice, and on the second to Lake Garda. During the week, they explored Vicenza in the evenings or enjoyed a meal at an osteria. "Overall, the internship abroad was a great experience that we highly recommend," the two agree. "Because you get a comprehensive insight into the working world and working techniques of another country and learn a lot of new things."

Are you interested in vocational training at Mahr? Then take a look at our job portal. There we have already listed the training opportunities for 2023.