From Ethiopia to Göttingen – and to Mahr as a trainee 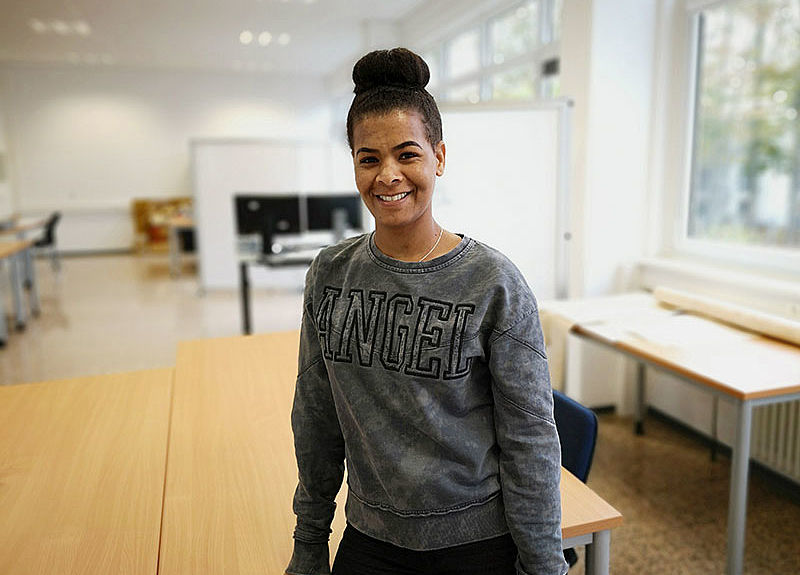 As diverse as the company and its products, so diverse are our employees. In the category People at Mahr, you will get to know some of them. Today: Diana Tadesse Gebru, Electronics Technician Trainee for Equipment and Systems.

Diana Tadesse Gebru has been living in Germany since June 2014. She is actually from Ethiopia, where her family still lives today. Diana has always had a knack for technology: at school, she was inspired by math and physics, and in her spare time she repaired radios. It was clear to her early on that she would like to work in this direction one day. It was also clear that this would remain a dream. In the country in the Horn of Africa, the profession as an electronics technician exists – but not for women.

Moving on to a new life

The situation changes abruptly when Diana has to flee her homeland in 2014 and comes to Germany. Supervised by a host family as part of the refugee program, she attains the secondary school certificate in 2016. The little bit of English she learned in her school in Ethiopia provides a basis for communication – yet communicating in the foreign country is initially a major hurdle. After finishing school, the young woman has to leave her host family and stand on her own two feet. She is confronted with topics such as housing and the search for a training program and the often dreaded German bureaucracy. Not entirely without help, but without the guidance of the parents, on which young adults usually like to lean on.

Her former host mother finds the job advertisement at Mahr and shows it to Diana. She knows it is Diana's heart's desire to learn a technical profession. The difficult circumstances of why the twenty-year-old has even come to Germany ultimately bring something good along with it: the opportunity to gain a foothold in her dream profession.

As an electronics technician trainee for equipment and systems at Mahr, Diana is now in her third year of apprenticeship. Within these three years she rotates departments to get to know all relevant areas and to gain practical experience: "Up next for me is R&D and then on to assembly." One thing is certain: when she has completed the program, she wants stay with Mahr. But she is still undecided about which area: "I will wait first until I have gone through all areas. Basically, I like to just sit down, make things and work on things. "

The special circumstances that have brought Diana to her present profession are no longer just constituents of individual destinies today. Many young adults find themselves in the situation of having to flee their country. For the twenty-year-old, it is therefore important to be strong for others as a training ambassador and to encourage those who are in a similar situation like she was. In October, Diana was distinguished for this special engagement by the Goettingen employer’s association of the metal industries within the framework of the Lighthouse Project.

The project honors apprentices who have excelled in school and/or social engagement. It was her instructor who suggested her for the award. That makes Diana proud, even if she modestly adds, "But the others are just as good." She has reinvested the prize money of 500 euros: "I bought a printer and clothes for the winter from it."