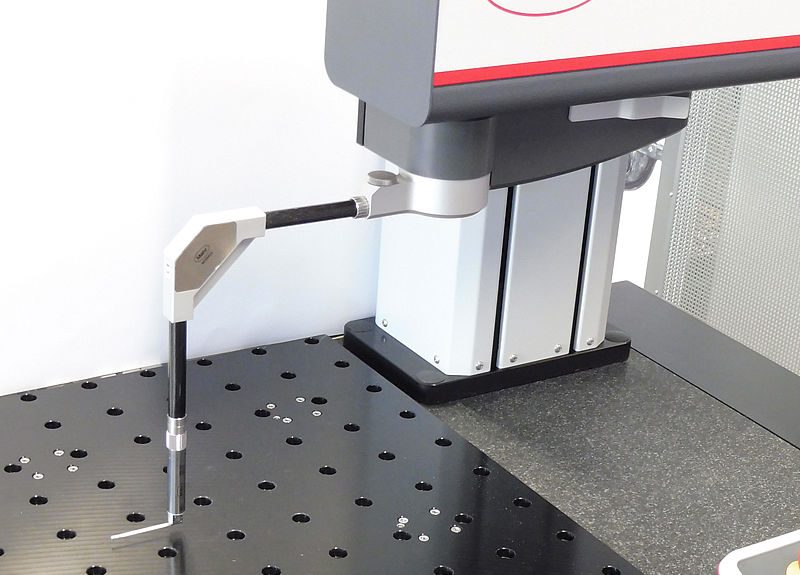 In rolling bearings, rolling bodies, mostly balls, reduce the frictional resistance between an inner and an outer ring. This is why people also like to talk about ball bearings. In order to ensure ideal running properties in the long term, the surface quality must be right. This can be easily checked with the new depth extension for styli.

For workpieces with large dimensions, such as rolling bearings, cylinder head blocks or gearbox housings, the standard probe arms of the MarSurf GD 280 reach their limits in terms of depth and flexibility. For this reason, the Mahr Engineered Solutions (MES) team led by project manager Raphael Kopp has developed a new, suitable solution for large components with a special depth offset or depth extension. This angled design can be easily placed as an interface between the BFW probe system and the probe arm, making deeper measuring positions for roughness measurements attainable.

Probe arms according to customer requirements

The new angled depth extension is mounted with the standard probe head and can safely bridge a depth of more than 200 millimeters. The interface is made of aluminum, and the cable harness is fed through it. CFRP rods provide the necessary high rigidity. "Because the extension is designed to be very rigid, it has been proven to deliver very good measurement values," explains Kopp. In general, an extension like this is of interest where roughness requirements are demanded in deep positions or for large, bulky customer components, such as in wind power, ship engine construction or the automotive sector.

The probe depth extension is now available in two variants:

The MES team at Mahr succeeded in developing this special solution relatively quickly: "We are very well positioned in the area of special probe arms, so that in principle a customer-specific design of probe arms for difficult-to-access measuring locations is possible," explains the project manager. The new probe depth extension was developed explicitly for the MarSurf Family B and can be ordered under part numbers 9000682 and 9039455.